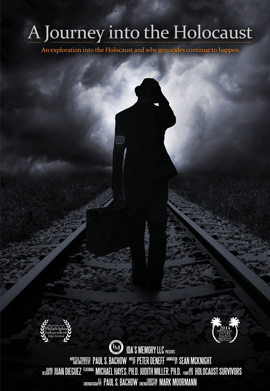 A JOURNEY INTO THE HOLOCAUST STORE

Choose one of the four options below

The price to screen the film if you are not selling tickets is $136 for the first 125 viewers and $1.00 for each additional viewer.

Click here to fill out the screening request form.

Not available until the end of the festival season.

Not available until the end of the festival season.

Why this film is so important

Since the end of the Holocaust in 1945 there have been over 50 genocides or mass atrocities, resulting in the deaths of up to 24 million people. Genocide continues to happen. Throughout history Jews have been slaughtered en mass at least 70 times. Is it obvious that something in human nature makes genocidal behavior continuously re-occur? Civilization tries to tame the beast inside us by establishing laws to govern our behavior. This creates a constant tug-of-war between our innate animal instincts and civilized behavior.

We are rapidly approaching the time when there will no longer be any Survivors of the Holocaust to bring that nightmare to life. Every Survivor went through many unique experiences. This film has fourteen Survivors who share their experiences in high definition as if they are in a room with you or visiting a classroom in person. Future generations of students will have the opportunity to have Survivors meet with them and understand how innocent these people were. In addition these Survivors will talk to thousands of children every day in classrooms around the world for generations to come.

By teaching the lessons of the Holocaust we will develop the insight to work to reduce both the frequency and severity of genocide. This film will provide the viewer with the signs that should set off sirens in their head. Each of us will come to know how critical it is to fight this constant battle and protect our family and our society.

This film has been carefully researched and is edited to keep your attention. It is so comprehensive in scope and often in depth that you may need to watch it several times. We recommend it for audiences from age 15 to our most senior citizens.. The film is peppered with graphic images that are there to avoid cleansing this story in order for every viewer to remember the dangers of genocidal threats.

The film is designed to be watched straight through for a run time of 93 minutes and twenty seconds. For classrooms the film has numerous natural break points. The teacher’s guide is designed to cover the film over five class periods and allow for a discussion both before and after each segment. The film is meant to be watched, discussed, absorbed and create engagement and dialogue among the viewers. This film breaks new ground by bringing breadth and depth to the analysis of genocide and prejudicial beliefs.