How do we teach the Holocaust? How do other countries teach the Holocaust? The United Nations Educational Scientific and Cultural Organization (UNESCO) and Georg Eckert Institute recently released a comprehensive report on Holocaust education in global curricula entitled “The International Status of Education About the Holocaust: A Global Mapping of Textbooks and Curricula.” This highly detailed document examines both the semantics used to describe the Holocaust and the context in which the Holocaust is taught in different countries. The report first establishes the status of Holocaust education in curricula in 135 countries, and then surveys the narrative presentations of the Holocaust in 89 textbooks from 26 countries.
Of the curricula examined, 57 countries are categorized as having direct reference to the Holocaust. Another 46 countries have curricula which only refer to the context of WWII or to National Socialism without specific reference to the Holocaust, and 28 countries have curricula that fail to mention the Holocaust or its context at all.
In the assessment of textbooks from 26 countries, the report addresses how the Holocaust is represented in spatial and temporal terms, how perpetrators and victims are identified, the various interpretive paradigms used, the narrative structure and perspectives employed, the didactic approaches to student engagement, and the regional idiosyncrasies that influence the tone and conceptual representations of the Holocaust. This exploration into textbook instruction demonstrates vast disparities in historiographies and pedagogical approaches to depicting the causes, events, and consequences of the Holocaust.
All of the countries surveyed demonstrated varying degrees of personalizing the events of the Holocaust. The report states, “The Holocaust is subject to shared patterns of representation, which include selectivity, personalization, appropriation, screening and omission. It is also subject to narrative idiosyncrasies. One of the main trends worldwide is domestication, a process whereby countries place emphasis on the local significance of the event or appropriate them in the interests of local populations.” Several countries (China, Rwanda, India etc.), draw direct comparisons between the Holocaust and other local genocides, mass atrocities or historical examples. This change in contextualization in some cases distorts and downplays the significance of the specific events and consequences of the Holocaust.
There was a wide array of content in the textbooks, in different degrees of depth and breadth, with numerous structural approaches and depictions of who was involved. For instance, textbooks in several countries refer primarily to Adolf Hitler as responsible for enacting the Holocaust, and the Nazis responsible for executing his plans, without ever mentioning the role of bystanders or individual civilians. Some textbooks only identified Jews as victims of the Holocaust, neglecting other targeted groups such as the Roma and Sinti entirely. Other textbooks focused their depiction of victims as being members of “the resistance” or “opposition” which emphasizes political motivations and eliminates the elements of racial and religious persecution. These differences in framing the events of the Holocaust contribute to international gaps in understanding the multitude of moral, political, economic and even psychological conditions of the Holocaust.
The report concludes with a list of suggestions and recommendations to help further international efforts to establish universal standards and practices for teaching the Holocaust. The range of instructional media currently available in different countries focuses on diverse and contradicting themes. Moreover, the regional and local beliefs, histories, and cultural perceptions of authors and policymakers can dramatically influence the manner in which the causes and effects of the Holocaust are represented in classrooms, if at all. The hope is that these recommendations will help teachers, policymakers, and textbook authors develop new policies and materials that encourage educators to cooperate internationally in developing shared concepts. 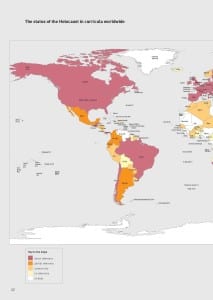 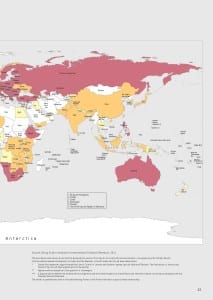