Grand Mufti of Jerusalem played a major role in the Holocaust October 21st, 2015 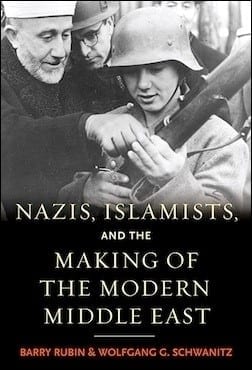 The film A Journey into the Holocaust discusses how the Grand Mufti of Jerusalem got Britain to dramatically reduce Jewish immigration to Palestine. The Grand Mufti, al-Hajj Amin al-Husaini, was possibly even more successful in his efforts with Hitler.

At their meeting [on November 28, 1941, Hitler and al-Husaini] concluded the pact of Jewish genocide in Europe and the Middle East, and immediately afterward, Hitler gave the order to prepare for the Holocaust. The next day invitations went out to thirteen Nazis for the Wannsee Conference to begin organizing the logistics of this mass murder.

This pact included a commitment by the Grand Mufti of the support of Muslims and Arabs as Allieds conditioned on Hitler closing “Europe’s exits to Jews”. One of the three premises of A Journey into the Holocaust for a genocide is the inability of the targeted group to escape. It was relatively easy for Germany to close European ports, roads and railways under its control. Borders were heavily guarded and helping a Jew was an immediate death sentence. It also confiscated most of the wealth of Jews attempting to emigrate, making them unattractive potential citizens and possibly indigents.

At the same time countries in the rest of the world were being blanketed with propaganda that Jews were a danger to the world so other countries were very reluctant to accept them. In addition, countries at war with Germany felt that foreigners attempting to emigrate could very likely be foreign spies to other countries.

The above steps to block escape were rather simple to accomplish. The mass murder of 6,000,000 Jew took a much greater effort.