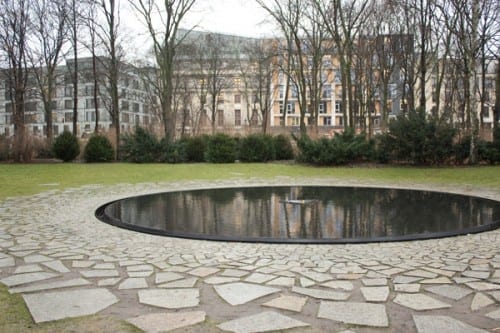 The mass killings of various targeted civilian groups by Germany and its allies during World War II took place throughout many parts of occupied Europe. Although Hungary and Austria assume little to no responsibility for their murderous role in the extermination of civilians, Germany does assume full responsibility for its actions. As a response to this acknowledgment of responsibility, Germany erected a memorial in Berlin to honor the 500,000 European Roma and Sinti, (collectively referred to as “Gypsies”) murdered during World War II.

The Memorial for the Sinti and Roma of Europe Murdered in National Socialism, on Simsonweg in Tiergarten Park near the Reichstag and Brandenburg Gate, is more than just a statue. Outside the memorial stands a chronology of large pages describing, in both German and English, what was done to the Gypsies. These pages transform the memorial into a place of learning and act as a harsh reminder of what man frequently does to targeted minority groups. The text of these pages is especially insightful since it presents the official German position of what happened.

The memorial itself is a pond surrounded by a wide walkway creating an area of somber contemplation. Every day fresh flowers are placed in the middle of the pond via an access panel. The tunnel to the access panel extends to the Reichstag which symbolizes the commitment of the government to the memorial. Interspersed among the wide walkway around the pond are plaques with the names of each extermination camp and location where Gypsies were interned and murdered during the Holocaust. Gypsy violin background music plays throughout the memorial area. The memorial was commissioned in 1992 and opened on October 24, 2012.

During World War II at least 25% of the Roma and Sinti population was murdered by Germany and its Axis partners. This execution of the Romani is known as Porajmos, which means “devouring” or “destruction” in some Romani languages. Discrimination against Gypsies continued after the war in Central and Eastern Europe. Until 1979 the official position of The Federal Republic of Germany government was that all measures taken against Gypsies before 1943 were legitimate official measures against persons committing criminal acts and not due to racial prejudice. In 1982, Germany officially recognized its genocide of the Roma and Sinti.

The text of the chronology is available on our Resources page under Documents.
Click here to see that text.