Anti-Semitism is Alive and Well at the New York Times May 1st, 2019 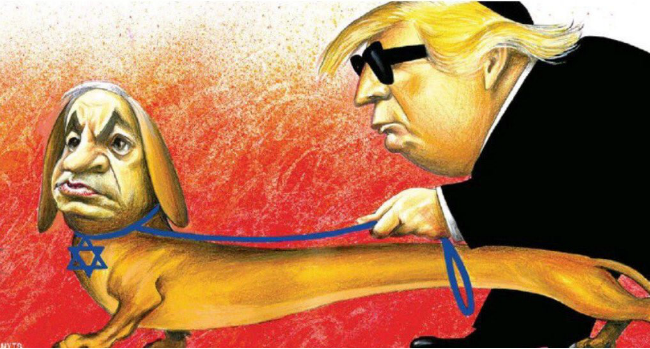 During World War II, the New York Times buried stories about the death camps operating during the Holocaust deep into their newspapers.  Today it practices anti-Semitism at a more aggressive level. On April 25th it published a blatantly anti-Semitic cartoon showing a Dachshund dog with a face of Israeli Prime Minister Benjamin Netanyahu and a Jewish Star collar.

The dog image reflects historical anti-Semitic messages that Jews are not human or are sub-human. By picking a Dachshund, the Times further messages that this is even a low-height, just above the ground, dog.  Just to make sure no one misses the target of the message the cartoon has a prominent Jewish Star of David.

For centuries there have been messages that the Jews are “puppet masters” behind world leaders and pulling the strings of foreign policy. Examples are the Chronicles of Zion and Nazi posters.  Here the Jewish guide dog is pulling Trump, the President of the United States.  Trump also has dark glasses like those worn by blind people that have to blindly follow others, and has a yarmulke to show that he is controlled by the Jews.

This cartoon is filled with classic anti-Semitic stereotypes and offenses.  Why does a widely read, respected publication like the New York Times continue to espouse anti-Semitic and anti-Israel messages? This latest cartoon is not an isolated incident, but part of a continuous stream of false and biased information designed to change the beliefs of its readers. Link to article on NYT anti-Semitism

On March 28, 2019, the Times ran it its Sunday Magazine section an eleven-page pro-BDS cover story. BDS is an anti-Semitic organization that uses economic warfare to destroy Israel and denies the right of Israel to exist. The author has publicly stated that no Palestinian will ever accept a Jewish state in Palestine. The article is unbalanced and fails to mention that in the United States 27 states, after extensive study, have adopted anti-BDS legislation.

The Times has also been publishing articles blaming religious Jews for spreading measles but ignoring outbreaks of measles in over a hundred areas including Amish and Somali-American communities and California amusement parks. These articles imply the historical beliefs that Jews are disease carriers and should be exterminated. The isolation of Jews in Ghettos by the Nazi’s was justified as a safety precaution for the non-Jewish population. The film A Journey Into the Holocaust covers this false belief that Jews carried the Black Plague into Europe in the 14th century when 30% of the population died. Black Death is now determined to have come from Central Asian Fleas living on the back of black rats that traveled on all merchant ships. This spread the Black Plague throughout the Mediterranean and Europe.

They have also run an article claiming that Jesus “was most likely a Palestinian man with dark skin.” It never mentions that Jesus was a proclaimed Judean Jew. The Romans eventually called their conquered territory Syria Palestina. This is a deliberate attempt to deny the Jewish connection to the Land of Israel.

We should never accept the views of a single news source, no matter how well known. To be informed we must seek out publications with opposing views and know history. Once we know an organization is biased, we must make sure that others know about that bias as well.  Countries that control their press know how powerful biased news can become.  Information bias, without a free press and an informed public to oppose those views, historically leads to genocidal action, including mass murders.